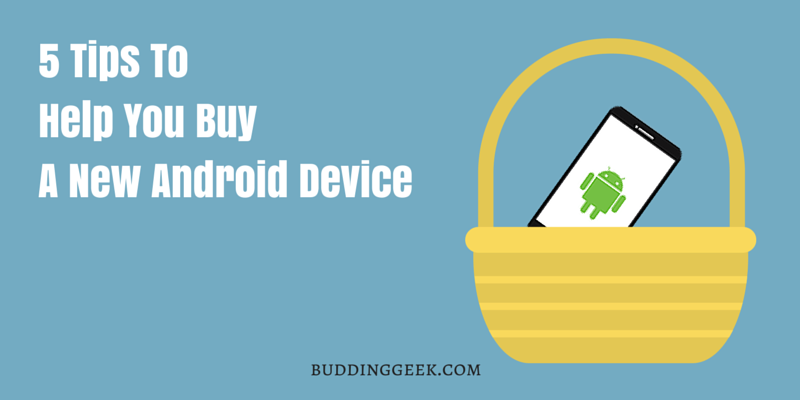 Are you planning to buy a new android phone, but can’t decide which one to go for? You are at the right place. In this post I have highlighted 5 key points that must be considered before shelling out your money for a new android phone. I hope this post will help you narrowing down your search 🙂

Also called the phone memory, internal storage is that limited storage space on your phone which keeps many important elements like installed apps, their data, contacts, messages, bookmarks, cache and many other personalized phone settings. Moreover, unlike a regular micro SD card, it can neither be upgraded nor replaced. Feeling the importance? You should 🙂

Think of RAM as a kind of storage space on your phone where the android OS core apps and the apps currently in use, are stored. Caching of apps occurs in RAM only. Whenever you quit an app, android doesn’t actually quit it. It, in-fact, allocates some space for it in the RAM and stores it over there so that next time whenever you wish to use that app again, it can be launched much more quickly (this is because, RAM is faster than your internal/external storage).

I’d recommend to always go for an android device with at-least 1 GB of RAM. Anything less than that will make your phone sluggish.

Processor is the CPU of your smartphone. It is responsible for the overall performance and speed of your smartphone. The operating speed of a processor is measured in hertz (Hz). A high operating speed means that the processor is able to execute more number of cycles per second, thus giving you a noticeable boost in the overall speed and performance of your device. Ideally an android device with a processor speed of 1GHz or more than that should be suffice to handle almost all the high-end tasks effortlessly!

Having a grand screen is always advantageous to accurate typing, reading eBooks, playing games and watching photos and videos. But always make sure that the grand screen is pocket-able and comfortable to hold (3.5 to 5 inches is ideal)

Then comes the PPI (Pixels Per Inch). To acute eyes, less PPI tends to make the edges (of text and icons) appear rough and chunky, whereas more PPI will make it difficult to discern individual pixels on the screen! For a better grip of the concept, I have created an image above. The two screens are of almost the same size but the PPI on the left screen is better than that on the right one. Now that’s one of the reasons why the 5 inch screen of Galaxy S4 (with 441 PPI) appears so lively and brilliant as compared to that of the same 5 inch display of Galaxy Grand (with a mere 187 PPI).

Always prefer a phone with the latest android version (it’s Lollipop right now). A phone that ships with the latest android version out of the box is much likely to support the upcoming android updates, however it largely depends upon your phone’s manufacturer. If you want to get android updates faster than anyone else, go buy a nexus device. My Nexus 4 came with 4.2.2 (Jellybean). Hardly a month passed by and it got updated to 4.3. Then came the KitKat (4.4) and now it runs android 5.0.1 (Lollipop). So many updates. Yay 🙂

Benefits of having the latest android OS:

Besides these, do you consider any other factor before buying a new android device? If yes, feel free to share it in the comments below 🙂

How To Flash a Custom ROM On Your Android [SAFELY]