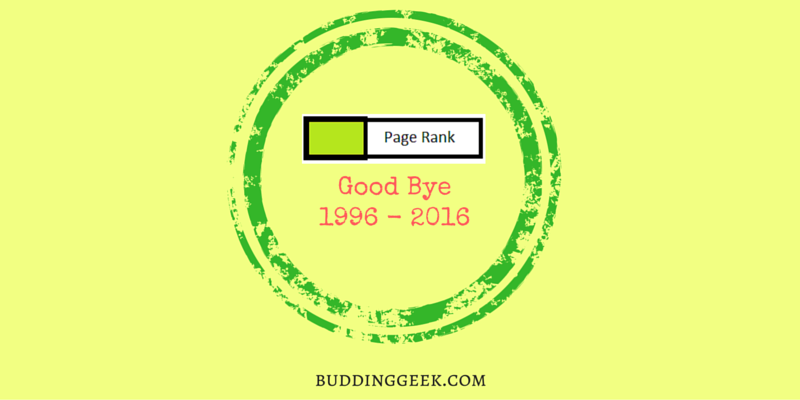 Google PageRank has long been a standard benchmark for the SEO community.  During March 2016, Google made a historical announcement for the SEO world – “We are doing away with PageRank scores“. Their toolbar PageRank stopped working & all the external web-based APIs based on PageRank started showing PR-0 for all the websites on the planet. PageRank has officially died. Peace! No more worrying about passing of link juice, no more reciprocal links & no more worrying about do-follow and no-follow links. Finally, finally, we can imagine a peaceful web. Whoa!

The digital marketing world in the retrospect

When I started blogging in 2009, website owners and digital marketers were crazy about that little green toolbar score (I even wrote a post explaining the benefits of PageRank). Measured across a scale of 0 to 10 (in increasing order of importance & authority), a PageRank score of above 3 used to bring a sense of pride among the webmasters. For those who are hearing this term for the first time, please let me break it down for you –
[su_note note_color=”#fffa8c” text_color=”#000000″]Google Pagerank was a score assigned by Google to webpages based upon their relative importance in the eyes of Google. A Pagerank score of 10 being the highest and 0 being the lowest. It was (officially) one of the several factors considered by Google in its search ranking algorithm. The more the number of incoming do-follow backlinks to a webpage, the higher used to be its PageRank score, and the better it used to rank in the organic search results. High authority websites like Twitter, Facebook, Wikipedia and Google were assigned a score of 10/10. While relatively less authoritative websites like Forbes, New York Times, etc were assigned scores like 8 or 9. Websites with high Pagerank used to be revered. They were hot destinations to build dofollow backlinks. The link juice concept actually started from here. Some link-juice (or authority) used to pass onto the websites which were linked to from those pages with high pagerank. This indeed increased their own pagerank scores.[/su_note]

How PageRank ruined the web? And the reason why Google scrapped it.

Though beautiful as a concept, the green score created many challenges for the search giant – It gradually developed a black hat SEO business model that aimed at gaming the search engine results, and thus tried defeating Google at its own game.
It’s not wrong to say that Pagerank gave birth to many popular black hat SEO practices like buying and selling of links, reciprocal links, link networks and link farms. Links from websites with PR5 and above used to sell like hot cakes. And those web directories…damn! How can one forget them? And also those importunate guest writers plainly begging for do-follow links in return! PageRank score became a morbid obsession among the marketers – a standard benchmark for building & trading backlinks.

But that’s certainly not the end of score mania: After PR, it’s DA!!

Digital Marketers will however always rely on scores/rankings as yardsticks for their SEO success. After the demise of Pagerank, marketers seemed to have shifted their focus to other important scores like Domain Authority (DA) & Page Authority (PA) by Moz. Though these scores co-existed with PageRank, but the latter score overshadowed their importance being one of the scores directly used by Google in its search ranking algorithm. Still, a high DA/PA score is a good indicator of the number of incoming links pointing to a webpage, and its ability to rank well in organic search results. Anyways, who knows whether or not Google considers DA/PA scores in its search ranking algorithm? No one else, but Google!

Do you miss the green bar?

If you will ask me, Yes, I do miss it. It was always a great feeling to see the green bar on my web-browser indicating how much Google loved my website. I earned PR2 from PR0 right after 6 months of building this blog. My second blog (on digital photography) was at PR4. Damn…this score is now a history.

It’s a classic example of how dynamic the SEO world is; The factors which were highly relevant yesterday are useless today, and nobody really knows what gets rotten tomorrow. After all, it’s a game designed by Google, with its own mysterious rules and regulations. And to survive in this game, all that we can do is to continuously adhere and adapt to whatever rules the Big G ever comes up with!

2 thoughts on “Google PageRank is officially dead. Now what?”